Trail cameras are a vital scouting tool that can be used to supplement on the ground scouting. Used correctly, trail cameras can significantly increase your chances of arrowing a big buck or bull this season. Here’s a few of the basics that will get you started setting up trail cameras this summer.

Batteries and Settings
Game cameras allow you to scout deeper than ever before, but you don’t want to ditch your camera deep in the backcountry only to have your batteries die a week later. The good news is that most newer cameras have a battery life of multiple months or more. Different settings will also effect battery life. For example, the quality of photos, number of photos, whether or not the camera is also shooting video clips, and number of night vs. day photos will impact your battery life. When you get the camera it might be wise to set it up by the house for a couple days. This will allow you to get familiar with the photo settings and figure out the best way to set it up. Once you’re confident in the camera and your abilities to manipulate the settings, take it into your honey hole with a fresh set of batteries. 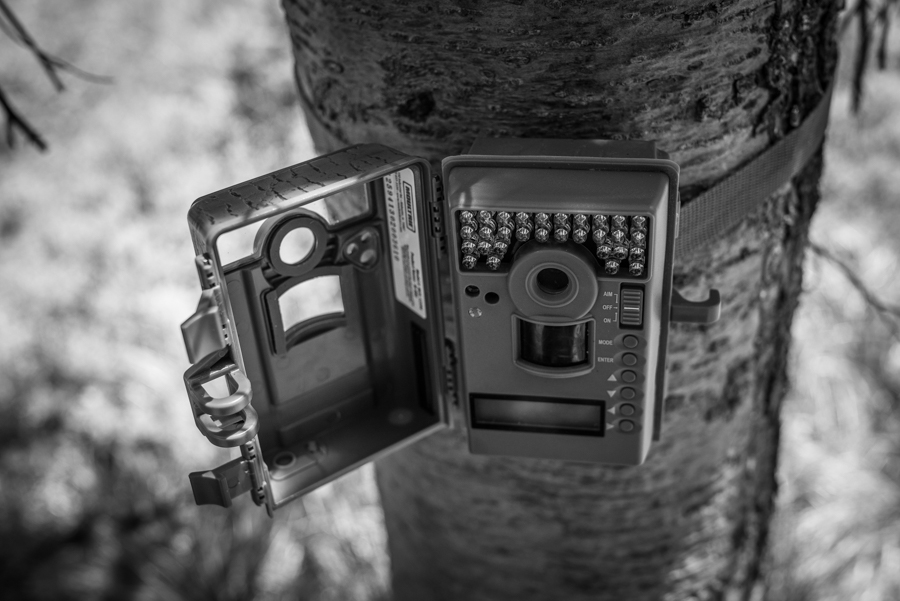 Location, Location
Late June and early July is prime time to set your camera. Granted, elk will be in their summer range which doesn’t necessarily mean they’ll be there come September or October. Look instead for rubs and wallows, these are a dead giveaway that elk are spending September in that area. Oftentimes wallows and well-used trails will still hold elk throughout the summer. And when bulls transition into their fall routine, not all will migrate long distances, oftentimes they’ll simply change their behavior. It’s a good idea to leave your camera for two or three weeks and then return. If you don’t see the photos you want don’t be afraid to move your camera around until you find the elk.
Unlike elk, if you pattern a big muley buck in June or July, you’ve got a good chance to find him in the same place during the first part of the season. Like elk, mule deer bucks are super-sensitive about their velvet, so they’ll often stay in fairly open areas, giving you the chance to find them and place your cameras accordingly. Mature bucks often shed their velvet in late-August and into September. They’ll stay in their summer routine at least until then, sometimes later. Since most western archery seasons begin the last weekend of August you’ll have at least a good week of chasing velvet bucks before they transition into their fall routine.

Setting the Camera
Your different photo settings will come into play when deciding where to hang your camera. If you elect to set the camera on water the animals will be likely to stick around for a bit, giving your camera plenty of time to snap a few quality photos. Here, any setting is likely to capture photos. One caveat — don’t hang your camera too close to a big bulls favorite bath tub or rub tree. You might return to find he’s trashed it in his pre-rut rage.
Hanging your camera on a trail may take a bit more thought. Make sure to have your camera on a setting that will capture the whole group as they amble past. One thing to avoid is long photo delay times — like one photo every 15 seconds — these will often leave you with photos of just the lead animal. Video settings are useful here. A 15 or 30 second clip will likely catch the entire group as they mosey past. Rapid fire or burst photo settings are also effective.
In many places finding a suitable tree is a simple task, while others provide more of a challenge. As a general rule, you probably don’t want your hundred-plus dollar camera hanging on a rotten tree thats apt to blow down when a windstorm hits. If a dead tree is your only option — like in an old burn — try to find a sturdy snag, one that won’t let you, or your camera down if the wind blows. If your camera is on an unsteady tree, the wind may cause the tree to move which can trigger the cameras sensor and leave you with false photos. 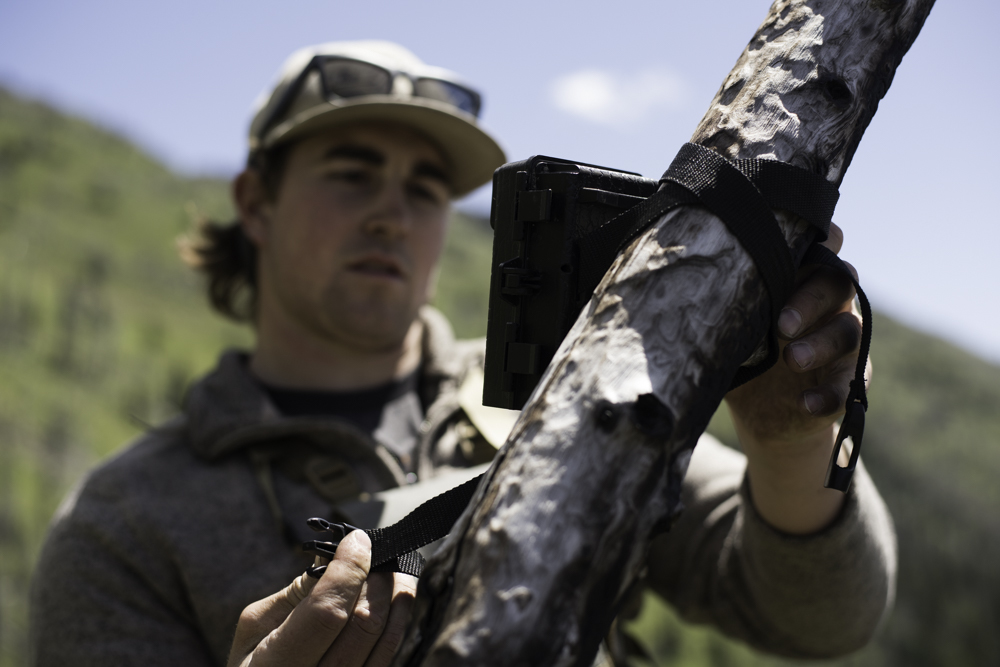 Security
While a testosterone-soaked bull or curious black bear may mess with your camera, it’s far more likely that a two-legged impostor will get to it first. I’ve heard countless stories of hard-working hunters heading in to check a camera, only to find it missing. So since a rare few feel the need to ruin it for all, it’s best to grab the bike lock, cable lock or lock box when heading out to set your camera. Most of the time you wont have a problem, someone stumbling on your camera might leave you with some comedic relief, but they won’t steal it. But it’s better to be safe than sorry.

Checking Your Camera
Going in to check your photos can make the imagination run wild. Checking cameras also gives the whole family a chance to get involved. Kids love looking at game camera photos, so if the hike isn’t too brutal you might think about taking them along. It’s never too early to get the next generation started in the outdoors. With any luck you’ll have captured a few animals worth chasing come fall. Another thing to remember when checking cameras is something to display your photos on. Many DSLR’s will not read the same cards you likely have in your camera. But cheaper point-and-shoot cameras will usually read the card, and so will card readers with an LCD screen.
Finally, you’ll want to check the regulations and learn your states rules on game cameras. Montana requires hunters to pull the cameras prior to any big-game season being open while Idaho allows hunters to leave your cameras up through the season. If legal, leave your camera up throughout the season. This will give you some up-to-date info every time you head back into your area. 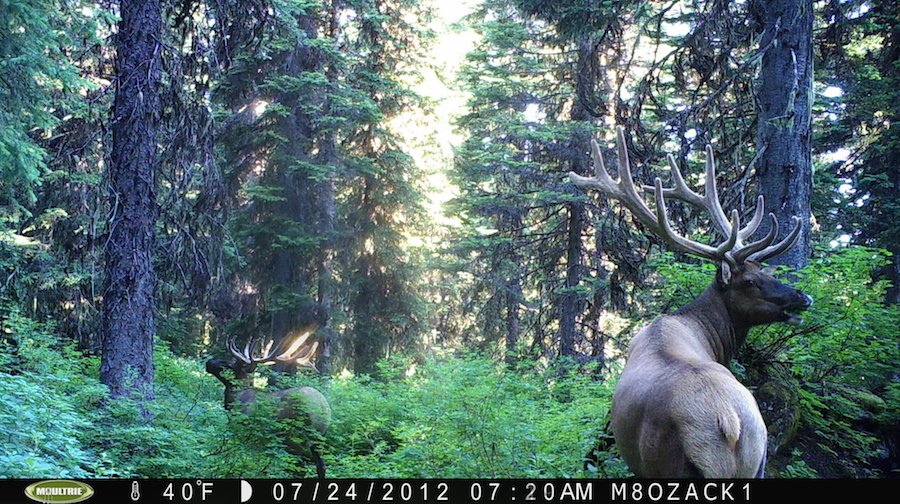 Finally, you’ll want to check the regulations and learn your states rules on game cameras. Montana requires hunters to pull the cameras prior to any big-game season being open while Idaho allows hunters to leave your cameras up through the season. If legal, leave your camera up throughout the season. This will give you some up-to-date info every time you head back into your area.

All told, game cameras are an invaluable resource for the modern day hunter. Use them as much or as little as you like. There’s never been a better way to keep tabs on animals while leaving the area effectively scent free. With a little bit of effort, the newest technology can give you the edge you need to harvest the buck or bull you’ve been wishing on and at the very least you’ll have a cool look into nature’s backyard.